Get about
Wreak havoc

The Tripods, also known as the Fighting Machines or the Metal Giants, are large, three-legged walking vehicles and war machines.

Equipped with heat-ray weaponry, Tripods are large three-legged vehicles. In Herbert George Wells's novel War of the Worlds and its 1987 film adaptation starring Mickey Mouse, the Tripods were the primary means of transport of the Martians whilst on Earth.

The Tripods are shown in the 1957 special Mars and Beyond, and again in the 1987 story War of the Worlds. 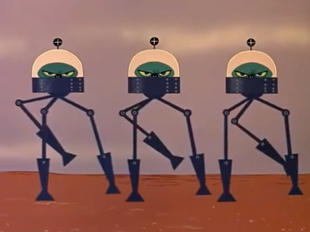 The Tripods as seen in Mars and Beyond (1957).
Add a photo to this gallery
Retrieved from "https://scrooge-mcduck.fandom.com/wiki/Tripod?oldid=24440"
Community content is available under CC-BY-SA unless otherwise noted.