Fighting against each other, for the amusement of Dr. Frankenollie

Tronics are a type of robot invented by Dr. Frankenollie.

Tronics are a type of large fighting robots. They are created in pairs by Dr. Frankenollie, who then pits them against each other for his own amusement. Every Tronic is fashioned after a famous hero or villain. Known people of which there is a Tronic version include:

The Tronics are the subject of a toy line, Disney "TRONICS" GvE. 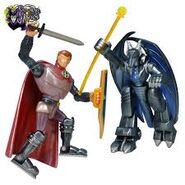 The Prince Phillip and Maleficent Tronics 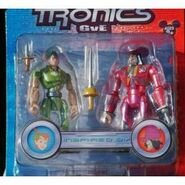 All of the Tronics in their original packaging
Add a photo to this gallery
Retrieved from "https://scrooge-mcduck.fandom.com/wiki/Tronics?oldid=26532"
Community content is available under CC-BY-SA unless otherwise noted.