Umble Kids stories
The Umble Kids are two young anthropomorphic dogs, a girl and a boy.

In the 1950's, these two kind-hearted, loyal, and surprisingly talented children lived with their mother, Widow Umble, a poor, widowed woman. The Umble house was really more of a shack, located in the middle of Shacktown, and the kids dressed in rags; keenly aware of the dire situation of their household, the children managed to win a snow statue contest opened by the then-Mayor of Duckburg with their “Snow Princess”, earning the Umbles $50 — a not inconsiderable sum at the time.

Some time later, they tried to build themselves a sled with which to win a toboggan race, but were prevented from entering by their young age and their lack of a proper sled. Huey, Dewey and Louie Duck (who, by then, they considered friends of theirs) posed as a grown man and won the race for them, gifting them the first prize, itself a high-quality toboggan.

The Umble Kids appear in the 1957 story The Snowman Contest, and reappeared in 2016 in The Great Toboggan Race. It is unclear quite when Toboggan Race takes place in relation to Contest, but they appear somewhat older there than they did in Barks's story. 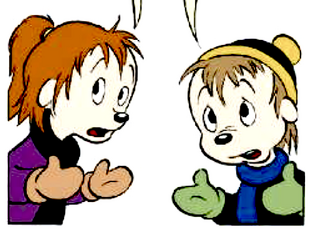 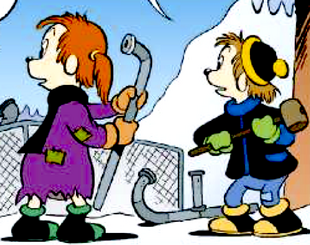 Building a toboggan.
Community content is available under CC-BY-SA unless otherwise noted.
Advertisement