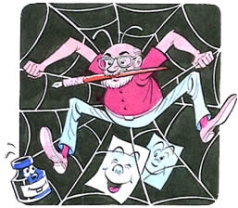 The son of famed escape artist and magician Earl Lockman, Vic Lockman wrote countless comics from the 1950's on and created several recurring characters, such as Moby Duck. He mostly wrote scripts that were later drawn by other artists such as Tony Strobl and Carl Barks; however, in the 80's, he also published a few Junior Woodchucks stories he drew himself. Lockman is generally held, however, to be a very mediocre Duck artist, and his writing work is far from having the popularity of Carl Barks's or Guido Martina's. Lockman nonetheless established several recurring facts of the Duck universe outside of characters; he can notably be credited with the idea of Scrooge earning his first pays as a shoe shiner in Scotland.

Oddly enough, Lockman was also a militant Christian and had written various books and tracts on the subject, such as Biblical Economics in Comics, Evolution Defeated or Psalm-singing for Kids.

Lockman lived longest of most Golden Age Disney cartoonists, dying peacefully at the age of 90 in June 2017, leaving a son, David. His last published Disney story was Strike-out, a 1997 one-pager featuring Donald Duck and Neighbor Jones. Two apparently unprinted stories of his are also listed on Inducks, possibly indicating stories that were delivered to the publishers at some point but for some reason weren't printed: the mysterious Tower to the Stars, featuring Scrooge and the Beagle Boys, and two one-pagers, Out-foxed and The Evil Scientist.