The Dangerous Chemistry of Gandra Dee

The Viking Shieldmaiden, or simply the Viking, is an anthropomorphic sow from the 2017 Continuum.

In unclear circumstances, this determined-looking Viking shieldmaiden once dated Launchpad McQuack. During this unlikely romance, Launchpad apparently became a (male) Viking shieldmaiden himself, or at least once dressed up as one, to accompany his ladyfriend into battle. As with all of his many love interests, Launchpad eventually parted with her on friendly terms.

Launchpad's Viking love interest was mentioned by him in the 2019 DuckTales 2017 episode The Dangerous Chemistry of Gandra Dee. Two concept sketches of him were later posted on Twitter by DT17 storyboard artist Sam King on August the 5th. She then posted an additional sketch featuring Launchpad and the Shieldmaiden the next day (this one created not as concept art, but more recently and for her own amusement). 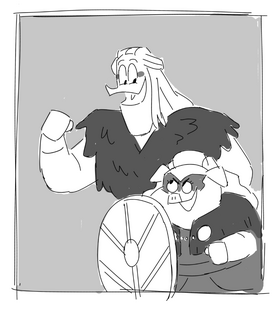 King's additional sketch.
Add a photo to this gallery
Retrieved from "https://scrooge-mcduck.fandom.com/wiki/Viking_Shieldmaiden?oldid=32245"
Community content is available under CC-BY-SA unless otherwise noted.