Webby is the granddaughter of Mrs. Beakley. They both settled in McDuck Mansion in 1987 when Scrooge hired Mrs. Beakley as a guardian for Huey, Dewey and Louie Duck. Webby is always trying to prove her worth to the Duck triplets, who tend not to take her seriously because she's “just a girl”, although they do care for her even though they rarely admit it; she is also loved by Scrooge, who has promoted her his "adopted niece".

Though set to make her official debut in the 1987 TV movie The Treasure of the Golden Suns, Webby ended up actually starting out in the 1986 television ad known as the “DuckTales Plush Toys Commercial”.

Webby was created especially for the classic DuckTales, although her physical appearance is based on April, May and June Duck. Emphasizing this, Dutch printings of classic DuckTales comic stories identify her as “Lizzy”, a name typically used for April.

Her character seems to have split the fanbase. Some fans see her as a very endearing character, but others think of her as a mercantile attempt at bringing an (overly, ridiculously cute) girl character to appeal more to female audiences. Due to her controversial status, Webby has not really made the leap to comics, unlike Launchpad, only appearing in comics directly related to DuckTales, with one notable exception, the 2016 story Paperino e i 6 gradi di separazione. 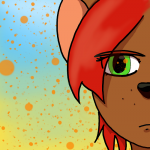