The Dangerous Chemistry of Gandra Dee

Wereduck stories
The Wereduck, also spelled WereDuck, is a non-binary[1] anthropomorphic duck and werewolf from the 2017 Continuum.

This friendly American werewolf, who still possesses some lupine qualities such as sharp teeth even when not transformed, and, curiously, was observed untransformed under the full Moon, calling into doubt precisely what kind of werewolf they are, is known to once have dated Launchpad McQuack. As with all of his many love interests, Launchpad parted with them on friendly terms.

Launchpad's werewolf love interest was mentioned by him in the May of 2019 DuckTales 2017 episode The Dangerous Chemistry of Gandra Dee.

Two concept sketches of them were later posted on Twitter by DT17 storyboard artist Sam King on August the 5th, also revealing that the character was referred to as “the Wereduck” by their creators. The next day, she posted three newly-created sketches of Launchpad with three of his exes, one of them being the Wereduck.

Although most viewers had mistakenly assumed the character to be male when the sketches were first unveiled, King later clarified that the Wereduck was intended to be non-binary, being possibly the first character in Disney Comics lore to be identified as such, outside of supernatural beings whose lack of gender designation is not so much a matter of personal gender identity as it is a a consequence of their not being defined in a human frame of reference at all. 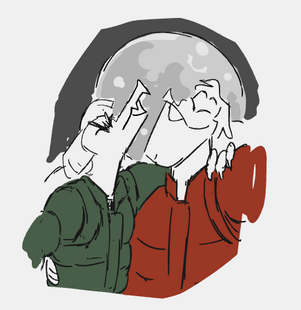 The Wereduck and Launchpad howling to the Moon (concept sketch). 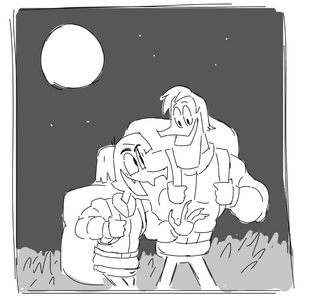 Launchpad and the Wereduck hiking under the moonlight (Sam King sketch).