What Ever Happened to Della Duck?

What Ever Happened to Della Duck?

What Ever Happened to Della Duck?!

Treasure of the Found Lamp
What Ever Happened to Della Duck? is the seventh episode of Season 2 of DuckTales 2017, written by Madison Bateman & Colleen Evanson (along with DuckTales 2017's normal team of writers) and directed by Tanner Johnson. It features the 2017 Continuum versions of Della Duck and Scrooge McDuck, images and mentions of Gyro Gearloose, Donald Duck, Huey, Dewey and Louie Duck, and the debuts of General Lunaris, Lieutenant Penumbra, the Mother Moonmite and its child. Though part of Season 2, the episode actually takes place in the timeframe of Season 1.

We wind back the clock to the fateful day Della Duck crashed the Spear of Selene on the Moon, and observe her struggle to survive and failed attempts make it back to Earth throughout the ensuing decades — including her confrontation with the monstrous Moonmite, and a reveal about the Moon that no one could have predicted!

It was the first episode not to star any of the "main cast" (excepting Scrooge McDuck's brief cameo in the cold open), and Della Duck's first true appearance on the show, after her younger self had played a part in the events of the Christmas special Last Christmas and a present-day Della had made a one-line cameo at the end of The Shadow War, and another at the end of the aforementioned Last Christmas.

Highlighting its special status, the episode did not feature the usual theme song and credit sequence, with the logo merely appearing over the image and then fading at the 02:22 mark. It did, however, feature a song all the same, namely Della's Lullaby, set to the tune of the famous Moon Theme (which itself is heard several times throughout the episode).

The title of the episode is a reference to the infamous Don Rosa drawing Whatever Happened to Scrooge McDuck? 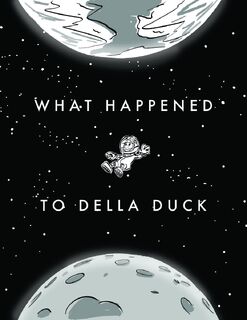