What Ever Happened to Donald Duck?

What Ever Happened to Donald Duck?!

Colleen Evanson
The DT17 Writers' Board

After Donald Duck crash lands on the Moon, Penumbra helps him escape prison. Together they discover the full extent of General Lunaris's schemes. Meanwhile, Dewey and Webby try to solve the mystery of why Donald isn't receiving any of the postcards his family send him.

Lunaris's attempt to get to Earth from the Moon by shooting himself there with a giant cannon, and the jokes at the expense of the implausibility of such a system, are a reference to Jules Verne's De la Terre à la Lune, one of the first "serious" science fiction novels to feature a trip from Earth to the Moon, achieved with such a cannon. 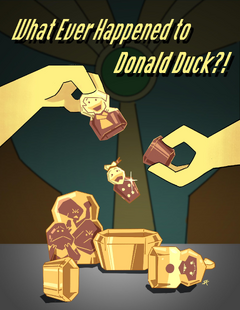 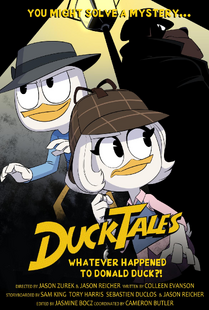 Movie poster #2.
Add a photo to this gallery
Retrieved from "https://scrooge-mcduck.fandom.com/wiki/What_Ever_Happened_to_Donald_Duck%3F?oldid=49300"
Community content is available under CC-BY-SA unless otherwise noted.