A human woman once visited the Haunted Mansion.

This young, mortal woman once lived through a momentous adventure in the Haunted Mansion, getting to know many of its ghosts in the process. Knowing from the get-go that it was going to be a "bumpy ride", she powered on through with an attitude somewhere between resigned and determined, though she also knew how to have fun at times. Two highlights from her journey include her somehow finding herself trapped inside the Flying Dutchman's painting and flying through the Ballroom of the Haunted Mansion alongside a ghostly knight.

This woman was meant to be the main character of Shannon Tindle's scrapped 2017 Haunted Mansion-based television series. She appears in the Haunted Mansion Intro Reel and concept artpiece that are all that remain of the cancelled series. Her name, and the identity of the actress who delivered her lines in the Intro Reel, are unknown. 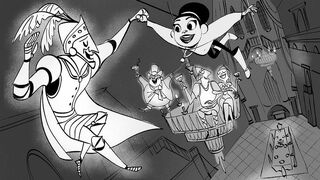 Leaked concept art.
Add a photo to this gallery
Retrieved from "https://scrooge-mcduck.fandom.com/wiki/Woman_(Haunted_Mansion_Intro_Reel)?oldid=25848"
Community content is available under CC-BY-SA unless otherwise noted.