Woody, Knockethead and Splinter Search For Pirate Treasure is a comic story drawn by John Carey. Notable for its non-Disney use of the character of Yellow Beak, it also features Woody Woodpecker, Knothead and Splinter Woodpecker, and, in his debut, Teach. Bluebeard, Captain Kidd and Terrible Teach are mentioned.

Woody Woodpecker, working a sea food grotto, frequently has to deal with old sailors and their yarns about pirate treasure — but none seem more real than the adventure in which Yellow Beak embroils Woody and his nephew and niece one night, seeking out the treasure of Terrible Teach and running from Teach's own treacherous descendant! Still, is everything as it seems?

This story was only ever printed once in English, in 1963 in Gold Key's Walter Lantz' Woody Woodpecker #76.

How the character of Yellow Beak made the jump from Disney to Lantz comics is unclear, though it may have been facilitated by Gold Key having held the rights to both franchises at the time; at any rate, it merely strengthens the preexisting connection between the Disney and Lantz ‘universes’, as they were already, famously connected by Oswald Rabbit.

Interestingly, the title — only given by the cover of the comic-book rather than the first page of the story itself — hints at the metafictional twist of the story, for anyone who notices the plot seems to be a remake of Donald Duck Finds Pirate Gold: Woody and the kids merely “search” for pirate treasure, whereas the title of the Disney story said from the start that Donald “found” it in the end. At any rate, Yellow Beak actively reenacting the events of Finds Pirate Gold seems to be a clever metafictional game on the repeated remakes of the basic Pirate Gold plot earlier perpetrated by Disney comics, including with Donald himself in Donald Duck and the Pirates (1947), with the Seven Dwarfs in The Seven Dwarfs and the Pirate (1949), with Captain Hook, Peter Pan and the Darling children in Captain Hook and the Buried Treasure (1953), and with Mickey Mouse in Clipper Ship Caper (1961). 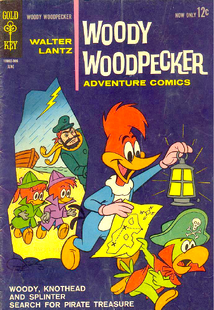 Original cover for the story.
Add a photo to this gallery

Retrieved from "https://scrooge-mcduck.fandom.com/wiki/Woody,_Knothead_and_Splinter_Search_For_Pirate_Treasure?oldid=48053"
Community content is available under CC-BY-SA unless otherwise noted.